Phenibut is a popular supplement, used by many to boost energy, reduce stress, and even improve cognitive function. First made available in Russia in the 1960s, the drug is now available online throughout the USA, and typically sold as an energy booster alongside vitamins and protein. But, while unregulated by the FDA, millions of people across the United States are now using it for everything from treating depression and anxiety to giving themselves an energy or cognitive boost at stressful jobs or while working out.

The drug, which was likely initially popularized on Reddit, has been available in the USA since early 2010. Today, it’s still legal to purchase it in pill and capsule form, but typically is only abvailable on the Internet. If you or a loved one is using Phenibut, or considering it, it’s important that you understand the risks, potential side effects, and how the drug works before doing so.

What is Phenibut and How Does It Work?

Phenibut is a GABA (gamma-aminobutyric acid) analogue, working as a GABA receptor agonist in the brain. The drug functions similarly to gabapentinoids like pregabalin (Lyciria), which are used to treat neuropathic pain, epilepsy, and generalized anxiety disorder, with a very similar drug-effect and side-effect profile. Currently, Phenibut is used in Russia and the Ukraine as a pharmaceutical drug, where it is used to treat insomnia, anxiety, depression, substance abuse, PTSD, and other disorders.

Phenibut achieves these effects by stimulating neuroreceptors like GABA and dopamine, reducing stress, pain, and anxiety throughout the body. Many studies correlate its effects to those of benzodiazepines like valium and Ativan.

It is also known to increase and extend the effects of other anxiety and depression medications, including antipsychotics, anticonvulsants, sedatives, opioids, and alcohol. Therefore, anyone taking prescription medication should be very careful of using a drug like Phenibut, as it will likely interfere with other medication being taken.

Most users take a dose of 250mg orally, kicking in after 60-120 minutes, and lasting anywhere from 4-9 hours. With a very long half-life, the drug stays in the system for long periods of time, even after the effects have worn off. Most users describe the high much like that of valium or other benzodiazepines, reporting a reduction in stress and anxiety, and sometimes more clear-headedness or ability to focus and concentrate. When used in combination with opioids and many other drugs, Phenibut increases and extends the lifespan of those drugs.

While many people treat Phenibut as a miracle drug, it includes numerous side-effects and some of them can be life-threatening. Most users experience sedation, sleepiness, nausea, irritability or agitation, anxiety, headache, and dizziness alongside motor coordination and loss of balance. Most users also experience a Phenibut hangover, much like that of alcohol. 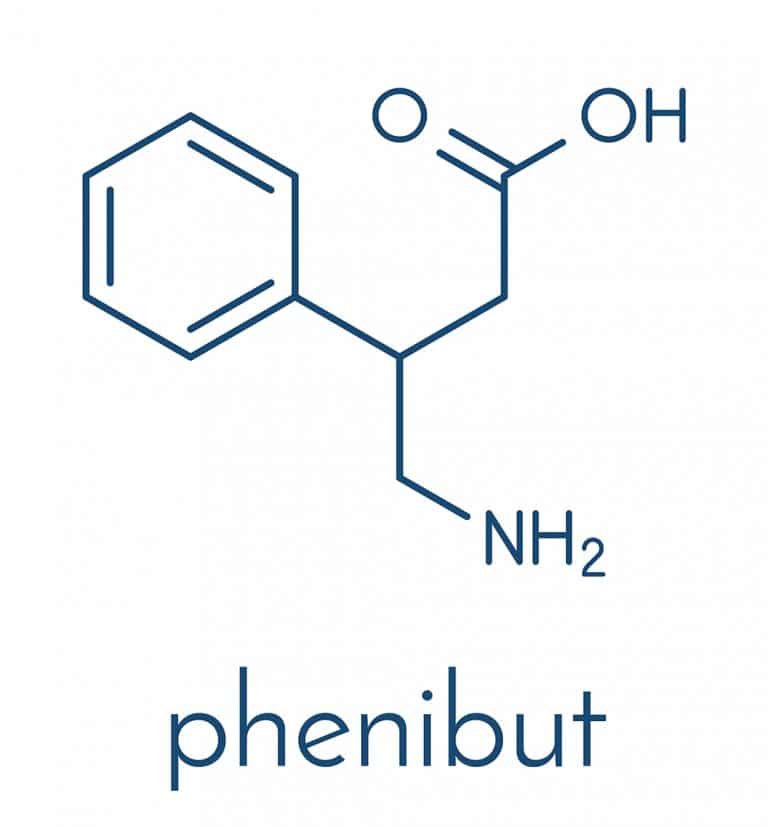 Common side effects include:

While moderate compared to the side effects of some other drugs, Phenibut side effects can last for 6 or more hours, and users cannot operate machinery and sometimes cannot function in normal situations while on the drug. Some users also experience allergic reactions or intolerance, which can be extreme.

This is a risk for first-time users as well as those who have built up a tolerance. The most common causes of overdose are:

A Phenibut overdose is characterized by severe nausea and vomiting, low blood pressure, fatigue, unresponsiveness, renal impairment, and liver degeneration (at very high doses). A person experiencing a Phenibut overdose should be given active charcoal tablets when available and taken to the hospital.

Phenibut is often taken by users believing it is a safe alternative to other forms of drugs but they are often mistaken. Phenibut quickly induces tolerance in users, who have to take more and more of the drug to maintain the same level of high when using. Even infrequent users sticking to the recommended 2x per week dose will experience withdrawal symptoms when detoxing, and symptoms can be severe.

However, the higher the normal dose and the more frequently the drug is used, the more difficulty users will have to quit Phenibut. Most studies compare Phenibut withdrawal to that of benzodiazepines such as Valium, with substance dependence and tolerance onset tracking about the same as other similar drugs.

Phenibut withdrawal symptoms kick in both when taking very high doses and when quitting the drug. Users experience severe anxiety, insomnia, irritability and anger, visual and auditory hallucinations, and psychosis. Users are recommended to seek out medical detox, to avoid detoxing in conditions where they might be operating heavy machinery, and to potentially taper off the drug if neither are available. Medical professionals recommend monitoring the liver and blood because of the risk of fatty liver disease.

Anyone using Phenibut moderately can likely attempt detox on their own without risk, but long-term and heavy users should contact their doctor, visit a detox clinic, or check into a hospital before quitting.

Getting Help for Phenibut Addiction

Like prescription medication, Phenibut can be highly addictive, dangerous, and side-effects can cause permanent damage. If you or a loved one is addicted to Phenibut, a treatment facility can help you to detox safely in a medically supported environment and then offer the mental and psychological care to treat the underlying issues behind substance use.

Getting help for Phenibut addiction is especially important for users who are self-medicating, treating co-occurring disorders including anxiety, depression, PTSD, and bipolar disorder with the drug. Each of these comorbid disorders contributes to substance abuse, makes it more difficult to quit, and can exacerbate the side-effects of the drug. At the same time, long-term substance abuse, including Phenibut, can worsen the symptoms of anxiety and depression, causing severe rebound and suicidal thoughts. Long-term use can worsen your symptoms and it may be dangerous for you to quit on your own.

A substance abuse treatment center will help you through detox, offering medical support and prescription medication to ease symptoms when necessary. Once clean, you’ll be given a complete mental and psychological evaluation to help identify comorbid disorders, underlying problems, and triggers – so that you can get the treatment you need to fully recover. You will also learn skills including stress and anxiety management to help you live a healthier and happier life without substances, so you can stay clean. No matter why you began using Phenibut, there is help.

Beginnings Treatment Centers is located in beautiful and sunny Southern California in Orange County, which has one of the strongest and most active recovery communities in the United States. If you or your loved one is struggling with alcoholism, call us today and speak with one of our experienced and professional intake advisors, we’re here to help.