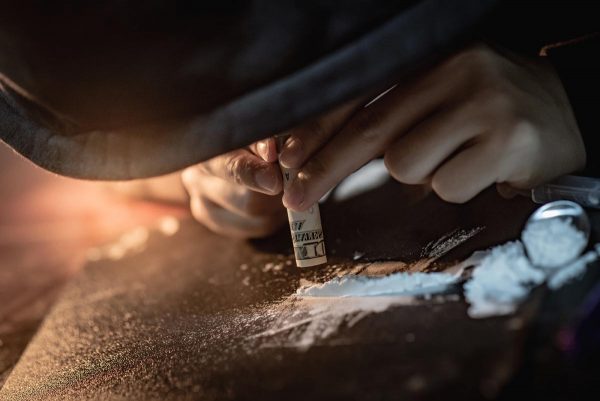 Cocaine is a stimulant drug and one of the most widely abused in the world. Despite a long history of high-profile use and abuse, more than 1.5 million people abuse it in the United States alone, contributing to over 500,000 emergency-room visits per year. While often used in small amounts, the drug is highly addictive, and frequent users are very likely to become physically dependent and then addicted.

Cocaine causes euphoria, improved alertness and energy, decreased inhibitions, and improved confidence, making it extremely popular in party and club scenes. The drug acts as a serotonin and dopamine reuptake inhibitor, creating a higher concentration of serotonin an dopamine in the body.

Over time, this is highly addictive, as the brain adjusts to different concentrations of the two chemicals.

Cocaine is moderately addictive in that it can cause dependence and addiction over a short time as the body adjusts to new levels of dopamine and serotonin. Physical dependence means that the body goes into withdrawal when you stop using and those levels reduce. However, cocaine is not as severely dependence inducing as drugs such as heroin, which cause addiction, where users act against their own best interest for more of the drug, much more quickly.

Instead, cocaine users can often use for months or even years before becoming heavily addicted. At the same time, cocaine users experience a pattern of highs and lows, euphoric and powerful while on the drug and lethargic and depressed or even unable to feel anything when off. This pattern encourages cocaine users to keep using so that they feel better, which does rapidly contribute to addiction.

Addiction is also reflected in financial problems, frequently talking about, obsessing over, or thinking about using, and continuing to use despite recognizing negative effects of using.

Many people who recognize that they have an addiction will simply try to withdraw. This is rarely successful on your own, especially in the case of stimulant drugs like cocaine, which cause a natural crash after use. Most cocaine addicts will go into withdrawal within 24 hours of their final dose, which will escalate over 3-6 days and then plateau, before fading out after about two weeks.

Here, users experience symptoms including strong cravings, disorientation, depression, anxiety, and panic attacks. This often includes general malaise, irritability, mood swings, and paranoia. Addicts experience a phenomenon known as emotional blunting, where they are unable to feel emotions for some time after using. This ties into reduced levels of dopamine and serotonin in the brain, which typically produces less serotonin on its own to account for decreased reuptake.

Cocaine detox is relatively mild compared to some other drugs, with few real risks. However, medical monitoring to prevent respiratory and cardio problems, as well as therapy to manage panic and paranoia, are recommended.

Cocaine detox is relatively mild compared to some other drugs, with few real risks. However, medical monitoring to prevent respiratory and cardio problems, as well as therapy to manage panic and paranoia, are recommended.

Cocaine addiction is a serious disorder and one that does require professional treatment. Users who don’t seek out addiction treatment will most likely just relapse, because the underlying problems behind the addiction are still there. Cocaine addiction treatment typically includes a combination of therapies including cognitive behavioral therapy, counseling, group therapy, and full support for stress management, co-occurring disorders, and individual problems. Cocaine abuse will significantly impact your or your loved one’s life. It will put their health, finances, and career at risk.

Getting treatment is the best way to ensure that they have the tools to recover, get their life back, and move on.