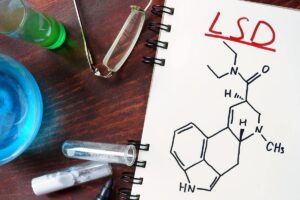 LSD, or Lysergic acid diethylamide is a psychedelic drug popular for its mind-altering properties, causing increased sensations, hallucinations and delusions, and wakefulness. A ‘trip’ lasts 4-14 hours, and typically includes visual hallucinations and an altered sensory experience, where users experience euphoria, radiant colors, a feeling of slowed time, and geometric or colored patterns. Today, more than 3.1 million Americans have tried it at least once, with many users indulging regularly.

While LSD is recognized as one of the least toxic drugs in a physiological sense, it’s also a drug that does have long-term side effects on the brain. Considering that the large majority of users are under the age of 20, many parents are increasingly concerned about the well-being and health of long-term LSD users. To understand LSD and its potential long-term effects, you have to know what LSD is and how it affects the body and brain.

LSD is a synthetic drug derived from ergoline, which is itself derived from the ergot fungus. Ergoline, interestingly, is often used in surgery of the brain. LSD reacts with the body by binding to serotonin receptors, causing cross-activation between receptors but no additional serotonin production. The result is the typical hallucinogenic and euphoric effect experienced by most users.

However, the exact effects of LSD can vary significantly between users. This is partially because the extent of effects depends on how well LSD is able to bind to serotonin receptors and partially because the drug varies significantly in quality, strength, and dosage due to the often-uncertain methods of production and distribution. So, some users might experience euphoria and pleasant hallucinations or a sense of enhanced spirituality while others might have a much more frightening experience.

LSD causes a number of short-term symptoms, most commonly visual and psychological hallucinations and euphoria. Most users also experience:

Most people experience significant differences between trips on a day-to-day basis. One dose of LSD may cause a person to be very happy, another may cause them to be immensely afraid and to hallucinate frightening things.

However, over the short term, LSD is far from toxic. Users are mentally impaired while under use, and may be more open to suggestions, especially if older or already mentally impaired, but are generally safer than when drinking alcohol.

What About Long-Term Effects 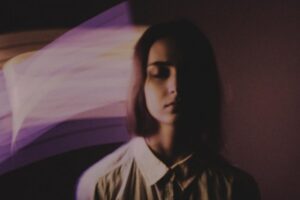 LSD is not considered addictive in a traditional sense and it holds a lower risk for abuse or dependence than most other illicit drugs. However, it can be tolerance inducing, which may, in very rare cases, produce addiction-like behavior. The biggest long-term risk for most users is known as sensory blunting, where a user is more accustomed to how they feel on the drug than off it, and therefore the sensory and emotional input received while sober seems blunted or dull in comparison to when high. This can cause addiction-like behavior.

Users with existing mental disorders such as PTSD, schizophrenia, anxiety, and bipolar disorder are significantly more likely to develop mental side effects such as anxiety and depression from using LSD. This is unfortunate, as people with these disorders are significantly more likely to turn to drugs like LSD to cope with their mental health problems in the first place.

The risks associated with long-term use of LSD are primarily psychological, with anxiety, panic attacks, paranoia, and mood swings worsening in the months following heavy LSD usage. However, these effects rapidly vanish once users are clean.

What About “Flashbacks” – Flashbacks are a common name for Hallucinogen Persisting Perception Disorder (HPPD), where a user re-experiences a trip or drug usage weeks or months after taking it. HPPD is not associated with physical changes or neurological damage and is considered extremely rare.

LSD tolerance happens when the body adjusts to certain levels of the drug in the body and users have to take more to get the same effect. This happens rapidly, with some users developing tolerance in just a few days. However, LSD is not addictive and is not habit forming. Users who take it may become mentally addicted, where they think they need it to function, but this is extremely rare to unheard of. Users have to significantly limit their use in order for safe doses of the drug to remain effective, or they may cause an overdose simply trying to get a high. However, there are no recorded instances of death caused exclusively by LSD.

In rare circumstances, LSD users can overdose on very large quantities of the drug. This can be life-threatening and users will have to go to the hospital. Persons suffering from an LSD overdose experience rapid heart rate, elevated blood pressure, and hyperthermia, which must be treated independently to reduce the symptoms.

Like any other drug, LSD can be dangerous. However, because it has minimal side effects and no real habit-forming tendencies, many people take LSD assuming it’s safe. Instead, they experience emotional blunting, may be more prone to putting themselves in danger while under the influence, and may lose motivation and interest in real life. Individuals who heavily use drugs like LSD often switch focus, so that all they’re interested in is the drug or having fun, not grades, their career, relationship, or even family. Some will also switch to another, more potent and dangerous drug, after becoming too tolerant to LSD.

If someone you love is using LSD, they can get treatment. LSD is not addictive, but it can still cause behaviors and problems that need therapy, medical assistance, and help to get out of. This is especially important in families, where heavy LSD use can change and get in the way of relationships, and family therapy is needed to fix the relationships so the family can remain healthy.

Also, many people use LSD and other drugs to cope with pain, stress, or a mental disorder. Getting treatment will help the person in your life to learn to cope with their problems in a healthy way, to get treatment if they’re suffering from a co-occurring disorder, and to learn healthy skills to manage stress and problems.

While LSD may not be physiologically dangerous, but consistently altering your mindset and experiences can change who you are as a person, how you are able to perceive the world, and even your interest in it. It can also impair the mind and psychology, putting the person at risk for the 4-14 hours until they’re sober.

If you are seeking help, either for yourself or for someone you love, you can get treatment please contact Beginnings Treatment Centers today and speak with one of our experienced and professional intake advisors. We’re here to help you or your loved one.