What is Alcohol Poisoning? 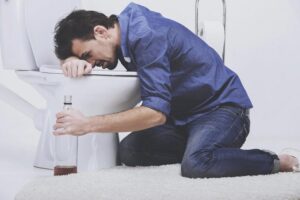 Alcohol is the most commonly consumed substance in the world, with roughly 86% of the United States population drinking at least occasionally. At the same time, 24.5 million Americans suffer from an alcohol abuse problem, meaning that they frequently binge or drink too much. While alcohol is widely accepted, and most people assume relatively harmless, it contributes to the harm and death of 20,000+ individuals each year. Alcohol poisoning, or blood toxicity from excessive alcohol poisoning, is just one of the many problems caused by excessive drinking, and one that could be indicative of a much larger problem. Approximately 2,200 adults die of alcohol poisoning each year, but many more are hospitalized and require treatment.

If your loved one has been hospitalized for alcohol poisoning, you may want to look closer at their habits, drinking, and health.

What is Alcohol Poisoning

Alcohol is quite simply the buildup of too much alcohol in the bloodstream, to the point where it affects vital bodily functions. As alcohol permeates the brain, it begins to depress functions, which initially results in the effects of inebriation including reduced inhibition and motor control most are familiar with. As the process continues, it begins to affect breathing, heart rate, and temperature regulation through GABA production, which can result in respiratory problems including stopping breathing, hypo or hyperthermia, and seizures. Many are also at risk of choking and dehydrating from vomiting, which can be significantly dangerous.

How Does Alcohol Poisoning Occur?

Alcohol poisoning occurs when someone drinks more alcohol than their liver can process, to the point of toxicity. For example, many individuals can process one serving of alcohol per hour, with a serving being about 12 ounces of beer, 5 ounces of wine, or 1.5 ounces of a spirit such as whiskey or vodka. However, this is generally considered a poor measure of intoxication because people process alcohol in different ways.

When the person drinks too fast, their liver is unable to process alcohol at a rate in which to reduce toxicity. This process can happen very quickly, especially when the person has a relatively low alcohol tolerance, is underweight, or has a slow metabolism. True alcohol poisoning happens when the Blood Alcohol Content reaches 0.250-0.399% depending on the person’s metabolism, weight, health, and ability to process alcohol. The number of drinks it takes to reach this stage changes a great deal depending on the person, so there is no one standard measure for how many of each drink it would take to have alcohol poisoning.

However, alcohol poisoning requires significant binge drinking, or rapidly drinking a large amount of alcohol in a relatively short period of time, or a large quantity over a longer period of time without enough time for your BAC to reduce in the meantime.

While alcohol poisoning is certainly indicative of the fact that the person consumed a large quantity of alcohol in one sitting, it says nothing about their long-term drinking habits. In fact, alcohol poisoning is actually more likely in persons who are not accustomed to drinking but who binge for a special occasion such as a birthday party or New Years. However, it is often indicative of at least occasional binge drinking. At the same time, only 10% of patients admitted to hospitals for alcohol poisoning are typically addicted or dependent on alcohol. So, while there is correlation between alcohol poisoning and alcohol abuse in the form of binge drinking, it doesn’t necessarily correlate to alcohol addiction. However, it is still extremely dangerous and may indicate a problem.

Persons suffering from alcohol poisoning will display a range of symptoms that can vary slightly from individual to individual but will almost always resemble a strong case of the flu. Very drunk individuals begin to lose balance and coordination, which worsens to shaking, uncontrollable movement, and even seizures as motor controls and blood sugar are affected. Alcohol also affects the gastrointestinal tract and the central nervous system, resulting in vomiting, poorly responsive muscles, seizures, and a risk of low blood sugar. For example, a high Blood Alcohol Content (BAC) reduces the sensitivity of the gag reflex, meaning that a person vomiting may simply choke instead of spewing vomit. 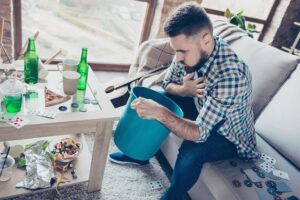 If someone you know is showing symptoms of alcohol poisoning, it’s important to act quickly. Call 911 or your local emergency number and, if you can, stay with them until the paramedics arrive. Individuals suffering from alcohol poisoning can cause themselves serious self-harm through accidental injury, can choke on their own vomit, and can slip into respiratory depression. You can help by working to keep them awake, getting them to drink water, rolling them onto their side if they are unconscious to reduce the risk of choking, and keeping them warm with a blanket unless the temperature is very hot.

Food, coffee, sudden shocks, or medication can be dangerous and may cause accidental death. Avoid feeding someone suffering from alcohol poisoning, do not make them throw up, and do not give them caffeine which can worsen dehydration. In most cases, a person suffering from alcohol poisoning is also still digesting alcohol, so symptoms will get worse before they get better. Emergency medical help is often necessary rather than “sleeping it off”, getting a cold shower, or otherwise using a home remedy.

Once the paramedics arrive, they will use oxygen therapy, an IV drip, and vitamins and glucose to stabilize the individual while using a stomach pump to remove alcohol left in the stomach.

Preventing Alcohol Poisoning and Getting Help

You can prevent future alcohol poisoning by eating before drinking, drinking moderately (such as one drink per hour), and drinking water.

However, some people end up with alcohol poisoning because they are unable to control binge drinking. Once they have access to alcohol, they will continue to drink at an uncontrollable rate and often not think about or be able to stop themselves. People who constantly talk about alcohol, look for excuses to drink, and/or uncontrollably drink any time they are around alcohol are typically addicted or at least chemically dependent and do need help. Alcohol rehabilitation treatment, including medically supported alcohol detox, counseling, and cognitive behavioral therapy will help individuals to address the underlying problems behind why they drink, to build coping mechanisms and skills to deal with those problems in a healthier way, and to move forward and live successfully without alcohol.

Binge drinking is extremely common in the United States, but it’s also extremely harmful. Even occasional binging can cause hospitalization and damage to the organs and stomach. Long-term and frequent binge-drinking can cause significant problems in terms of dependency, addiction, and myriad health issues. Getting help is important for ensuring the long-term mental and physical health of your loved one.  Please contact us today and speak with one of our experienced and professional intake advisors about treatment programs for alcoholism. Beginnings Treatment Centers is located in beautiful and sunny Southern California in Orange County, which has one of the strongest and most active recovery communities in the United States.