The Difference Between Crack and Cocaine

The Difference Between Crack and Cocaine

Cocaine and crack or crack cocaine are two of the most popular street drugs in the world. While cocaine was infamously once used in toothache medication, cough medicine, and even soft drinks, today, it’s an illegal Schedule II Controlled Substance drug. Despite that, an estimated 2.1% of the United States population uses the drug every year, with about 21 million people admitting to cocaine use and about 9.4 million people admitting to crack use.

If you suspect your loved one of using, are just curious, you likely want to know what the differences are. Is crack cocaine just cocaine? Or is it something different? While the chemical differences between crack and cocaine may actually be very small, the two are used very differently, which is crucial for individuals abusing the drug.

The coca plant is Erythroxylum Coca, one of four varieties of Erythroxylaceae, a shrub native to South America. The shrub contains an alkaloid, cocaine, at a density of between 0.25% and 0.7&%. Ethnic groups historically used the leaf as a stimulant, much like many people use coffee today. At the mild dose achieved through a single or partial leaf, many would have experienced a similar “high” to smoking a cigarette or having a few cups of coffee. This led to Coca Cola famously using coca leaf extract in their signature beverage, until the start of the anti-cocaine movement in 1903, eventually resulting in cocaine being banned in the Harrison Narcotics Tax Act. This act required any company using any derivative of the coca plant to register their usage of the drug and pay tax to the U.S. government.

Today, cocaine is illegal, prohibited from sale under nearly any circumstances. In fact, only about 400 kilos of cocaine are produced legally each year, most of which go to research purposes. The illegal market is significantly larger, with an estimated 300 tons of cocaine smuggled into the U.S. each year. 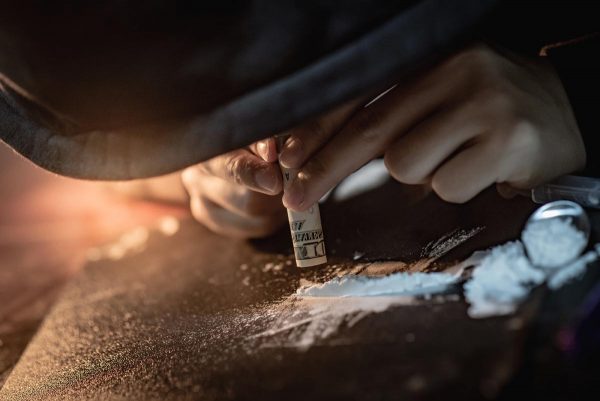 Cocaine is the most popular coca product, and the one that it is most commonly processed into. Cocaine is created by chemically stripping the alkaloid from leaves and presenting it in its purest form. As a result, individuals can take significantly higher doses than are found in just the leaf, resulting in stronger highs and more risk of overdose, negative side-effects, and addiction. The process of chemically stripping cocaine from the coca leaf typically involves harsh agents such as methane from fertilizer, gasoline, and cement. This creates a paste which is mixed with sodium bicarbonate and dried.

From there, the paste, which is then about 35% cocaine, is further processed. Chemicals including hydrochloric acid, alcohol, ammonia, and acetone are mixed with the dried pulp and then dried again or microwaved dry, resulting in a product that is pure cocaine hydrochloride (cocaine).

This drug is then powdered, sold by the gram, and typically snorted. The fine powder is also very frequently cut with other substances, resulting in a range of quality and added dangers from unknown chemicals. One of the most dangerous of these is Fentanyl, which can lead to a person who thinks they are using pure cocaine suffering from a Fentanyl overdose. 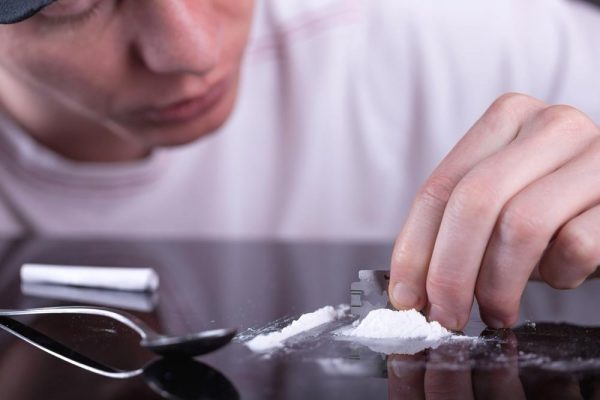 Crack cocaine is cocaine that has been processed for a third time. The process first rose to popularity during the 1980s. Here, cocaine hydrochloride is mixed with solvents including water and sodium bicarbonate (baking soda). It is then boiled to reduce the water to create a fine paste, dried, and then broken into rocks.

Unlike cocaine, crack cocaine can be smoked. The sodium bicarbonate allows the cocaine to be smoked at 98C, without burning or decomposing the cocaine. Cocaine must be smoked at 197C, which burns the drug and dramatically decomposes the active ingredients.

Crack and crack cocaine are two variations of the same drug, with the largest factors including ingestion method and purity of the drug.

Strength – It is commonly thought that crack cocaine is the stronger of the two drugs. However, cocaine is sometimes stronger by weight, but only if it is relatively pure, meaning not cut too much with adulterants. Crack cocaine, because of the process of its formulation, is as much as 30-60% sodium bicarbonate.

Ingestion – Cocaine is ingested through injection or snorting. Users typically feel cocaine within minutes of snorting and results last anywhere from several minutes to over half an hour. Crack cocaine is smoked, meaning that it passes the blood-brain barrier more quickly and hits the brain harder. Users feel an instant euphoria rush when smoking, which typically lasts about 5 minutes. This results in a completely different pattern of use.

Pattern of Use – Cocaine users typically snort cocaine and then enjoy its effects for up to half an hour. This results in predictable and often measured use, with users returning for more as their dose begins to wear off. Crack cocaine has a much shorter effect period and a much longer setup period (users have to fill and light a pipe). This typically results in binge behavior, where smokers will sit with a pipe and continuously take hits until the crack is gone. As a result, they get a significantly higher dose in the same period of time, which can create a higher risk of overdose and of addiction.

Effects – Cocaine and crack cocaine are the same drug with different concentrations. They’re also taken in different ways. Crack cocaine is typically taken in larger doses resulting in more physical and negative symptoms such as heart palpitations, flushed skin, agitation, mood swings, and anger. Cocaine causes these same symptoms when taken in large enough doses. Both cause feelings of power, euphoria, sexuality, well-being, and sensitivity. Both can result in a cocaine overdose, cardiac problems, and stroke if taken in very large doses. Snorted cocaine often damages the nose and the lining of the nose. Smoking crack cocaine can result in damage to the lungs and respiratory system as well as burns to the hands. Both cause side effects including weight loss, agitation, nausea, gastrointestinal inflammation, cravings, and addiction.

Withdrawal – Crack and cocaine both have the same pattern of withdrawal, with users experiencing anxiety, cravings, emotional blunting, depression, and possibly suicidal ideation. Most will also experience some form of general cold and flu symptoms such as runny nose, muscle pain, fatigue, and nausea.

While crack and cocaine are very similar drugs, they are viewed very differently by the general public. In fact, less than half the number of people using cocaine use crack, despite crack being significantly cheaper than cocaine. This is in part due to stigma, a history of crack usage by the urban poor, and prosecution that punishes crack possession as much as 18:1 versus cocaine usage. Where cocaine is associated with the wealthy and affluent, crack is often associated with ghettos and the drug raids of the 80s and 90s. So, despite crack having more potential for abuse and more potential for addiction, more people still use cocaine.

If you or a loved one is struggling with crack or cocaine, there is help. A rehabilitation center can help you safely through detox with medical care and support. Once clean, rehabilitation offers cognitive behavioral (or similar) therapy to help you recognize underlying problems behind drug abuse, to build new skills and behaviors to cope with life without drugs, and to learn how to manage cravings for drugs. Cocaine in any form can ruin your life, your career, and destroy your health, often permanently. You can recover and you can get your life back.