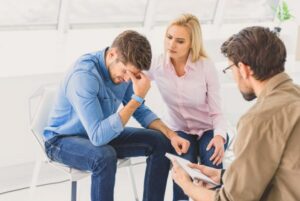 Psychodrama is an action method used in psychotherapy to help patients recognize and overcome aspects of behavior, emotions, or reactions that might be based on memory or previous experiences. The tactic is used to attempt to help patients through negative reactions and responses, to “unblock” creative, spontaneous, and healthy reactions to events, people, and interactions.

Psychodrama is often used to treat trauma-related disorders and problems such as PTSD, and in cases of child abuse. It’s increasingly adopted to help treat substance use disorder patients, who often struggle with emotional problems and repression and who may need to better understand their responses and behaviors in order to create new and better behaviors.

Psychodrama is the process of acting out internal conflicts through emotions and interpersonal interactions. In most cases, a session will be 90 minutes to 2 hours and will focus on a single protagonist, led by the director (typically the therapist) and sometimes with assistants.

Here, patients are asked to explore personal, professional, and social roles and the emotions behind them, through a series of drama exercises and with the help of a trained therapist. The idea is that individuals can explore trauma and emotions, giving individuals the tools to improve their daily lives.

Psychodrama was first founded in 1921, by doctor Jacob Levy Moreno. Moreno based his work on both his love of spontaneity on the stage and the influence of psychologists and thinkers of his day, such as Sigmund Freud and William Reich.

Today, psychodrama is not widely practiced, but it is seen as an important tool for helping individuals to share and explore emotions. It is considered especially valuable for treating children and those with expressive disabilities such as autism.

What Happens During Psychodrama Therapy? 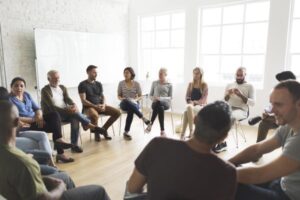 Psychodrama is divided into three phases, including a warmup, action, and sharing. Each session is roughly 2 hours long, although some may be shorter. Psychodrama sessions are almost always group exercises.

Warmup – During warmup, the director or lead therapist assigns a theme. This theme may be directed at the group or may be for the benefit of a single member who has personal problems or behaviors to explore. The protagonist is chosen, and the main role and chosen themes are discussed.

Action – The protagonist acts out a dramatic scene according to the theme. This phase takes up the bulk of time of the session. Depending on the theme and the individual, this scene may reflect actual happenings or may be completely improvised and spontaneous. The goal is to act out the theme, which often relate to memories, emotions, or behaviors.

Here, themes are often chosen in such a way as to remind individuals of their own behaviors and memories as discussed in previous sessions. The goal is to get people to process and realize emotions they may have attached to these memories and to recognize how those emotions have significant impact on their behavior.

Sharing – In the final stage, individuals are asked to discuss the scene, to empathize with the protagonist, and to discuss the emotions involved. This session may include sociometry, where the individual’s choices are explored in their direct relation to the person’s actions, behaviors, and interpersonal relationships.

In most cases, a psychodrama session will include a stage, lighting, and possibly even a set. 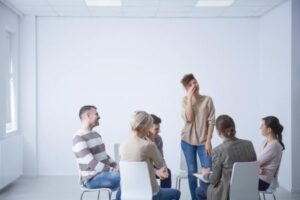 Psychodrama is loosely broken down into tools, in which individuals apply different tools to achieve different results.

Doubling – The protagonist has a double, who attempts to add emotion, thoughts, and feelings to the protagonist’s act. Here, the idea is to help the protagonist recognize and acknowledge what they are feeling, even if emotions like guilt, shame, or anger are preventing them from expressing those emotions. For example, if a person is struggling to recognize guilt or shame over how they treated a family member while addicted, doubling can help them come to terms with it.

Role Reversal – The protagonist is asked to play someone else while another actor portrays the protagonist. This is often used in situations such as reenacting discussions with family, where the protagonist may not recognize choices for what they are or may not recognize their own reactions. This tactic is commonly used in helping individuals to recognize when family members are trying to help, or when their actions are hurtful or even abusive.

Role Playing – The protagonist takes on the role of an individual or thing that is causing conflict or struggle.

Soliloquy – The protagonist takes some time to express their thoughts aloud to build self-awareness of their own behavior, actions, and thoughts.

These tools are applied at the discretion of the director or therapist, who shares expected tools and practices during the warmup session.

What are the Benefits of Psychodrama?

Psychodrama is an active therapy, in which individuals are expected to act, react, and engage. For that reason, it’s typically considered a complementary therapy, best used alongside other therapies such as behavioral therapy.

However, psychotherapy gives individuals powerful tools with which to express themselves, without emotional literacy skills, and without the need to talk. This makes psychotherapy a powerful option for children and persons with autism or other spectrum-related disorders.

Psychodrama can be a powerful addition to addiction treatment, simply because it creates a new mode of expression that requires you to be active and to stay involved with your group. Combined with its strong message of recognizing and learning from emotions and memories, psychotherapy can be beneficial in helping individuals move past trauma, change behaviors contributing to addiction, and to improve relationships with family members. 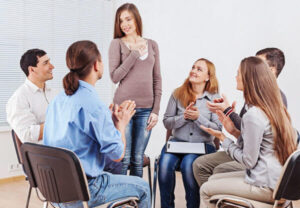 Psychodrama gives individuals new ways to express themselves, which can be important, especially as you are finding yourself in recovery.

Please contact Beginnings Treatment Centers today for an honest talk about addiction or alcoholism with one of our experienced and professional addiction treatment team. We’re here to help.