The Most Difficult Drugs to Kick 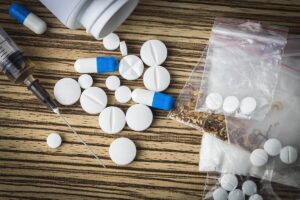 1 in 10 Americans, or roughly 23.5 million, are addicted to drugs or alcohol. With prescription medication like pain pills and valium, amphetamines including meth, and a range of dependence-inducing substances available over the counter, nearly everyone is constantly exposed to some form of substance – and many people are intensely vulnerable to addiction. While reasons often include stress and socio-economic factors, it’s well understood that some drugs are more addictive or more habit inducing than others. That also makes them harder to kick once you’ve developed a habit of substance dependency.

If you or a loved one is using substances, it’s useful and helpful for you to know what and why people are addicted, and why some drugs are harder to quit than others. While there’s a lot of science behind why some drugs affect people differently (including the same drugs), different drugs interact with the brain in different ways, producing different reactions or interacting with different receptors. Drugs which mimic natural neurotransmitters in the brain are often the most addictive.

While there are considerations, such as the fact that many drugs will impact you differently depending on your susceptibility, body weight, rate of usage, duration of use, and mental health, a 2007 study scored commonly abused drugs based on their addictiveness and potential for misuse, effectively creating a scorecard of the most difficult drugs to kick.

The 3 Most Difficult Drug Classes to Kick

Any drug addiction will be difficult to kick, simply because addiction and withdrawal are traumatic and painful. There are of course many different commonly abused drugs you should know about. However, the following 3 are the most difficult based on cognitive effects, changes in the brain, psychological addiction, and physical damage caused by the drug.

As one of the most commonly prescribed drugs in the world, benzodiazepines are often regarded as safe and necessary by many people. While this is true for some, benzos are also one of the most addictive and difficult to quit drugs and are abused by millions of people.

With physical dependence starting in just 2 weeks, and a medically recommended prescription length of just 5 weeks, it’s also not a surprise that millions of people who are often on the drugs for years are mentally and physically addicted. Over the short term, drugs like Valium and Xanax work to relax the muscles and reduce stress, they can be valuable tools for stopping panic attacks or relaxing someone with anxiety enough to get treatment. Over the long term, they can contribute to worsening issues including anxiety and panic attacks. Most importantly, they can be severely mentally and physically traumatizing when you go to kick the habit. With withdrawal symptoms including insomnia, hallucinations, anxiety, depression, vomiting, and potential seizures, many people simply cannot quit benzos on their own. Instead, long-term therapy, cognitive behavioral therapy, and counseling to increase stress management skills is needed to move users into a place where they don’t need the drug to function.

Amphetamines, including prescription drugs like Adderall and Mydayis as well as street drugs like methamphetamine, are one of the most commonly abused drug classes available. They’re also among the hardest drugs to kick, simply because they act as an upper, giving users a huge rush of euphoria and energy by mimicking the effects of dopamine and norepinephrine in the brain. Over time, amphetamine abuse can lead to depression, anxiety, ADHD, and strong physical health problems including hair and teeth lost, gastrointestinal damage, and organ failure. During withdrawal, these symptoms worsen, causing strong depression, anxiety, panic attacks, and mood swings as well as severe cold and flu symptoms, which can be life-threatening. Most users cannot kick the drug on their own and are often recommended to taper off of amphetamines slowly under medical supervision.

Opioids are the most commonly abused drugs in the world, with 26 million + people worldwide addicted to a drug in the class. The strongest and most addictive opiates include morphine and heroin (diamorphine), which are closely related to each other, but many other opioid drugs are available with a prescription and on the street:

Morphine is an addictive narcotic, and one of the hardest drugs to kick. Heroin is a synthesized version, up to 200 times the strength of morphine. While opiates are commonly prescribed as pain pills, even regular prescription users become addicted and may move from pain pills to street drugs like heroin as their prescription runs out. Withdrawing from any opiate class drug typically results in muscle aches, stomach pain, vomiting, tremors, and strong cravings, leading many people to relapse within a few days of quitting the drug.

What Impacts a Drug’s Addictive Potential? 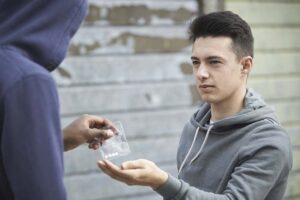 Some drugs are relatively easy to abuse but difficult to become addicted to. Users can abuse the drug for long periods of time and will rarely experience the sort of life-altering dependence seen by anyone abusing heroin or methamphetamine for the same time. At the same time, users experience even common and accepted drugs like caffeine differently as well. Some people will be heavily addicted to coffee, drink too much of it, and will experience headaches, shaking, and irritability when quitting (all common withdrawal symptoms.

The difficulty of quitting a drug is influenced by a combination of the body and the drug’s profile, which includes genetic factors influencing how the drug interacts with receptors (GABA, dopamine, opioid), the severity of withdrawal symptoms, cognitive changes caused by the drug, physical damage caused by the drug, psychological addiction, and cravings. Each of these factors can change based on the drug and its strength as well as its specific reaction inside your body.

The study determining which drugs are the most difficult to kick used these factors, taking specific instances such as personal willpower, sense of self, ego, discipline, motivation, and self-control into account. This means that while social and economic factors such as poverty and chronic stress or pain can play a part in vulnerability to a drug, the study took those factors into account to determine the most chemically difficult to kick drugs. A person who is very vulnerable could become heavily addicted to a less addictive drug and it could be just as bad or worse than a less vulnerable person chemically dependent on a highly addictive drug.

Most drugs are addictive because they impact the body and the brain, changing how you feel or think by altering the levels of chemicals and neurotransmitters in the brain. Even relatively harmless drugs can induce chemical dependence, which is why many drugs are difficult to get without a prescription.

Anyone who is addicted to a drug should seek out treatment, which will include detox (safely controlling withdrawal in a medical environment), cognitive behavioral therapy, counseling, and group therapy. It will also often include stress and life management such as meditation or mindfulness, building social skills, and often interacting with others in a group environment, which will help you to stay clean and sober as you leave treatment. In some cases, you may also receive medication such as buprenorphine or suboxone to reduce cravings for heavily addictive substances which can cause severe and even dangerous withdrawal symptoms.

If you or a loved one is addicted to any drug, there is help. A rehabilitation facility can give you the support, care, and personal attention to help kick the habit for good, so that you can move past addiction and back to your life. Please contact Beginnings Treatment Centers today and speak with one of our experienced and professional intake advisors, we’re here to help you.